2019 was the first full year of latinamedia.co and we were blessed with a bounty of riches when it came to TV. So many great shows centered women, people of color, and even the oh-so-elusive women of color. Here we’ve ranked our top ten shows of the year. Our criteria? How much we liked it (duh), its overall quality (based on our scientific quality meter), and how smart it was when it came to matters of gender, race, sexuality, etc. 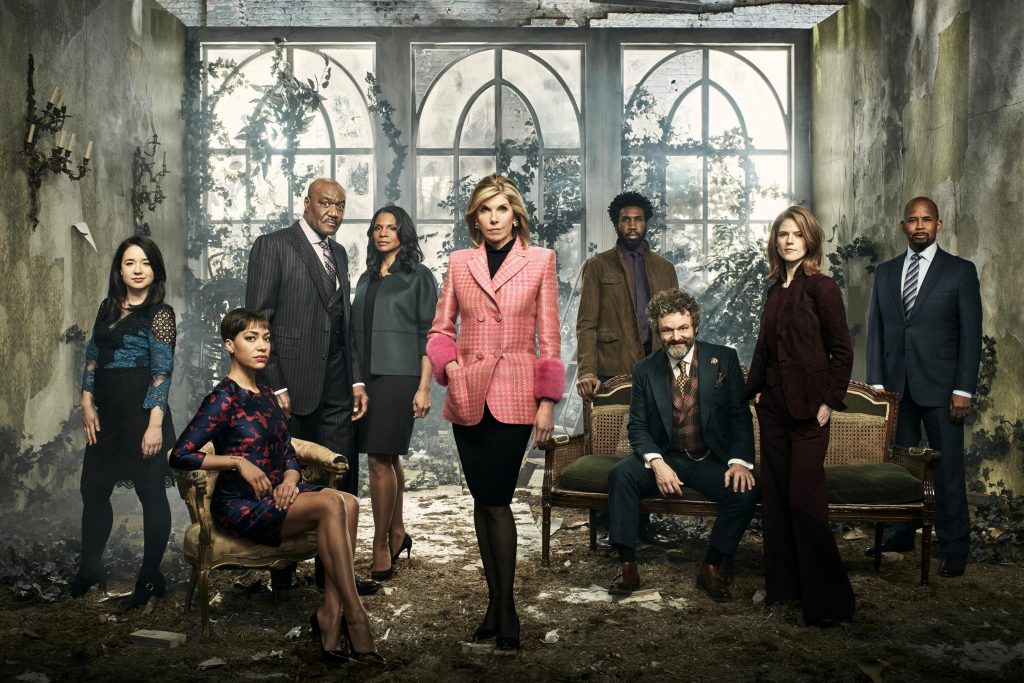 The Good Fight is the perfect show for the Trump era. It tackles breaking news and longstanding conspiracy theories (the pee tape) with equal amounts of the sincerity and absurdity of this moment. This year’s season three saw the ever-wonderful Christine Baranski as Diane Lockhart join, lead, and eventually quit a #Resistance group, with her firm Reddick, Boseman at times supporting and at times detracting from that work. We also got more of Audra McDonald as Liz Lawrence (née Reddick) plus standout performances by Cush Jumbo as Lucca Quinn and Sarah Steele as Marissa Gold. Really, the only thing that would make this show better is a guest appearance by Alan Cumming, reprising his role from The Good Wife’s Eli Gold, aka Marissa’s scheming father. Well, that and broader distribution. Who pays for CBS? 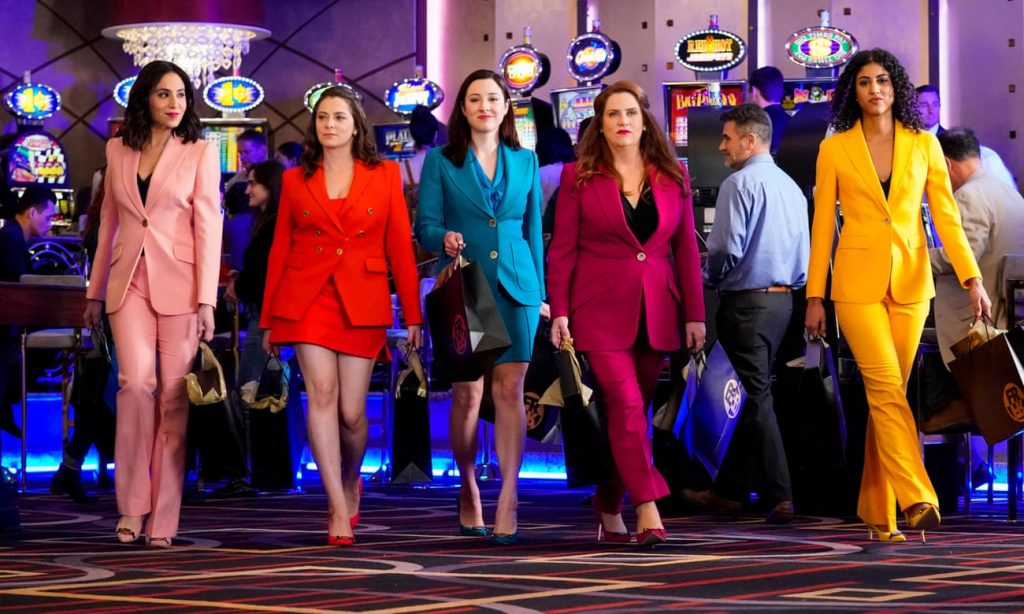 We were sad to see Crazy Ex-Girlfriend end this year but at least it ended on its own terms, pulling off a pitch-perfect ending. With original songs each episode, Crazy Ex-Girlfriend managed to be technically difficult without ever appearing overworked. We’re talking about the show with the most nuanced depiction of mental illness on television, thanks to numbers like “Anti-Depressants Are So Not a Big Deal.” The show was intentional about its feminism (the entire premise), anti-white supremacy (see the casting of Josh Chan, Valencia’s arc, when we learn Heather’s background), and even a nuanced discussion about being bisexual (Thanks Darryl). It’s also jammed packed with jokes about Southern California, the law, and musical theater. We’ll miss Rebecca and crew but are excited to see what show creator Rachel Bloom does next. 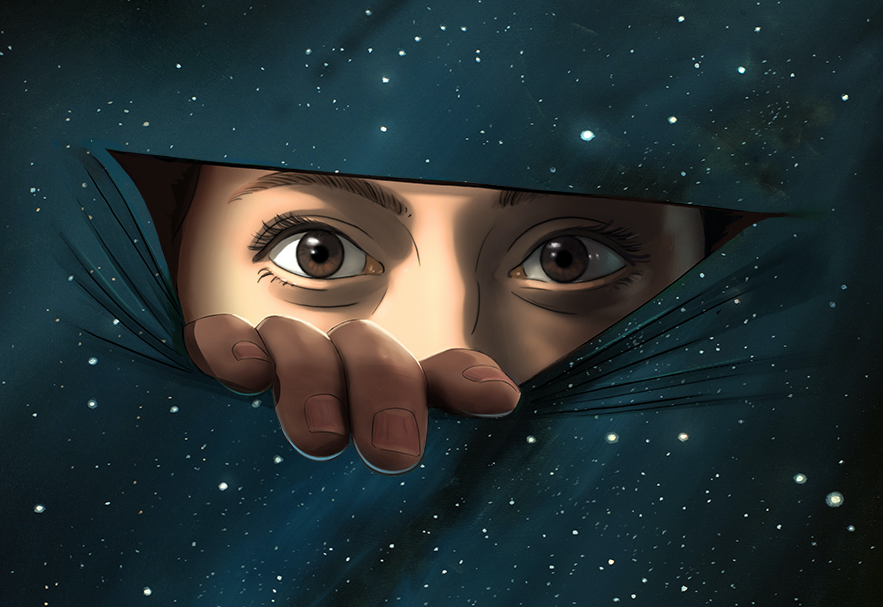 With eight episodes just over the 20-minute mark, Amazon’s Undone could have been a long movie. Instead, it’s a beautiful, short, serialized journey into the mind of one Chicana. Alma, portrayed by Rosa Salazar, is bored with her San Antonio life and sabotaging up her relationships as a result when she starts traveling through time. It’s more than disconcerting at first but her dead, white father played by (Better Call) Saul aka Bob Odenkirk serves as her guide, helping Alma learn to master her power with the hope of avenging his death. There’s only one problem — it may all be in her head, part of the schizophrenia that runs in her family. With a diverse cast each delivering standout performances and cutting-edge visual techniques, Undone is prestige television at its best, engaging with Latinx themes like mestizaje to weave a wonder-filled narrative. 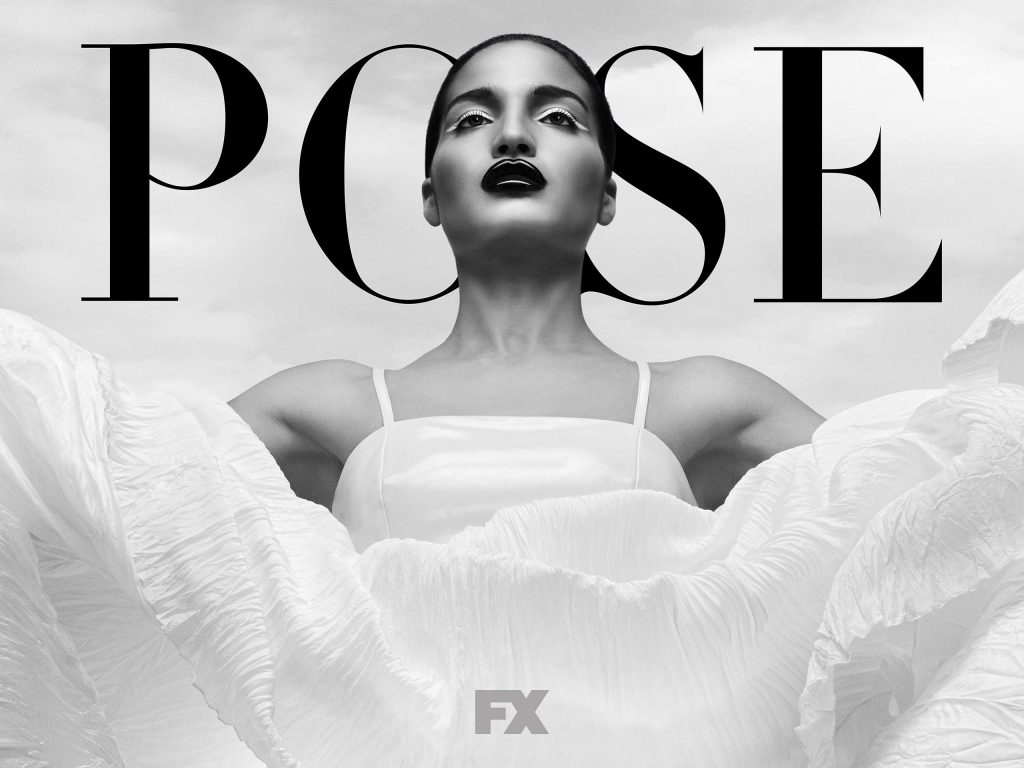 Created by Afrolatino Steven Canals in partnership with Ryan Murphy and Brad Falchuk, Pose is the real deal. The first season set records for the number of trans actors featured on a TV show and this year’s second season got rid of the obligatory white characters (we love you though Evan Peters and Kate Mara), making it even better. Pose made stars of Black Latinxs like Mj Rodriguez (congrats on the Critic’s Choice nomination!) and Indya Moore, not to mention opening the red carpet for Billy Porter, the winner of every unofficial fashion contest and of course, even official acting ones like the Emmys. And its writers’ room features the likes of Janet Mock and Our Lady J, demonstrating for those in the back, just how great TV can be when you authentically tell underrepresented stories. 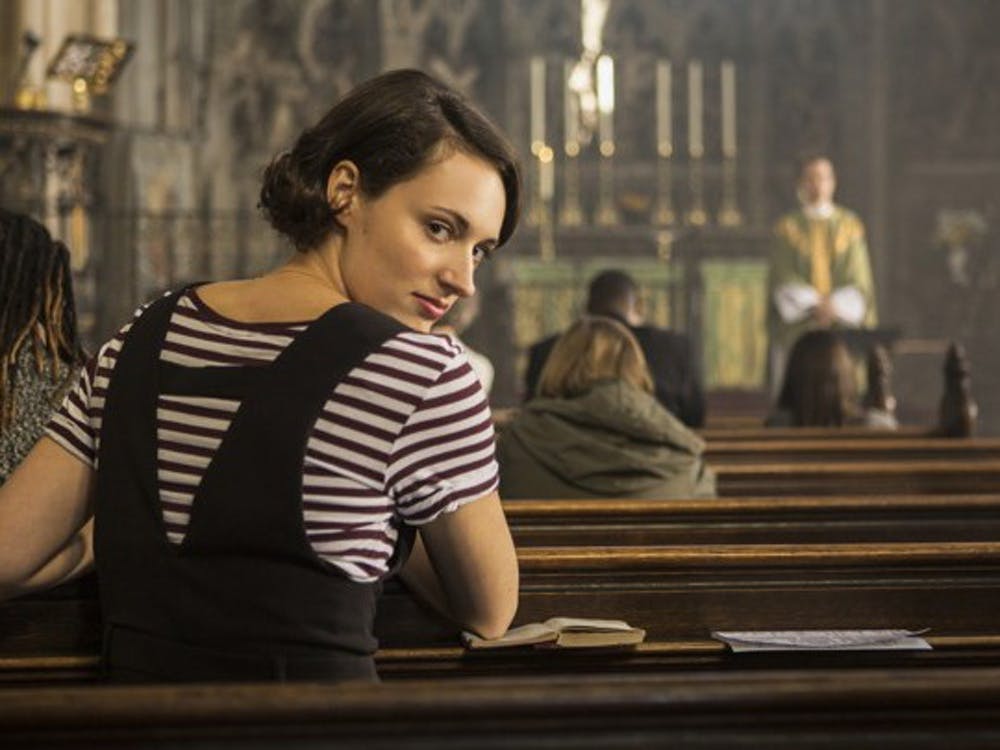 Fleabag is topping a lot of lists and we love it as much as the next critic. Pheobe Waller-Bridge is an amazing talent, her comedic timing is impeccable and her writing on Fleabag (not to mention on Killing Eve) manages to be cutting, insightful, and hilarious. This year’s season follows Fleabag’s pursuit of the hot priest (Andrew Scott who you may remember as Moriarity in Benedict Cumberbatch’s Sherlock). The priest manages to be the perfect match for Fleabag — he sees her when no one else does, noticing her asides to the camera and matching her self-destruction with his own. Our only issue is how this very funny British lady gets to tell the definitive story of sleeping with your priest when her whole country left the church some 500 years ago. 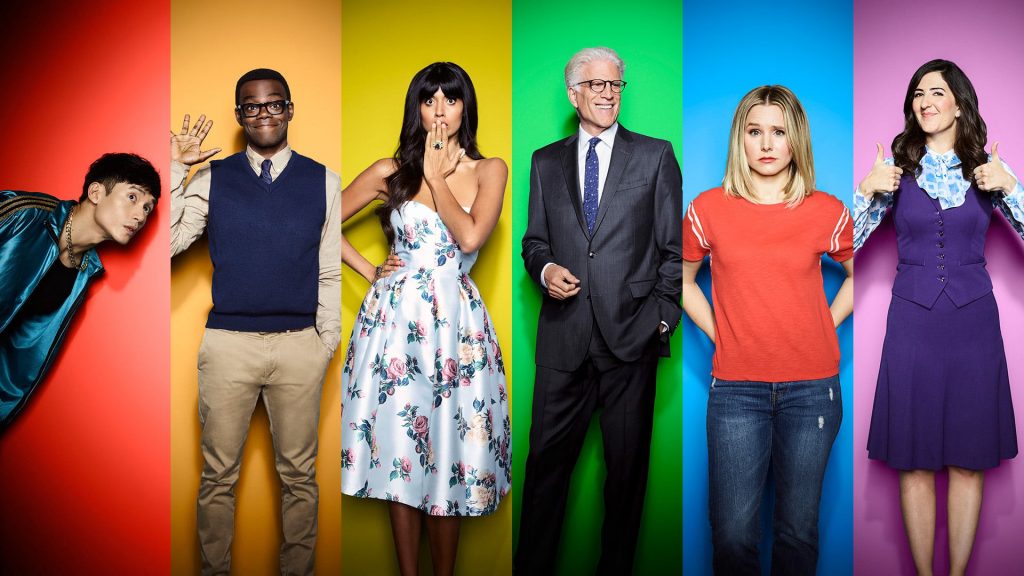 Who would have thought a sitcom that regularly namedrops Immanuel Kant could actually be funny? It turns out the big questions of philosophy can make for great television in the right hands (specifically, Michael Schur’s of Parks and Rec and Brooklyn 99 fame). The Good Place delivers laughs with the stumpers, helped by the outsized charisma of its diverse cast. With an even gender split and featuring as many non-white as white characters, the six principles are loveable and flawed. We want to name a stand out performance but really all six (Kristen Bell as Eleanor Shellstrop, William Jackson Harper as Chidi Anagonye, Jameela Jamil as Tahani Al-Jamil, Manny Jacinto as Jason Mendoza, D’Arcy Carden as Janet and Ted Danson as Michael) are all phenomenal and have fantastic team chemistry. We wish there was a Latinx in the mix but give The Good Place a pass as one of the only meaningful redemption arcs for women out there. 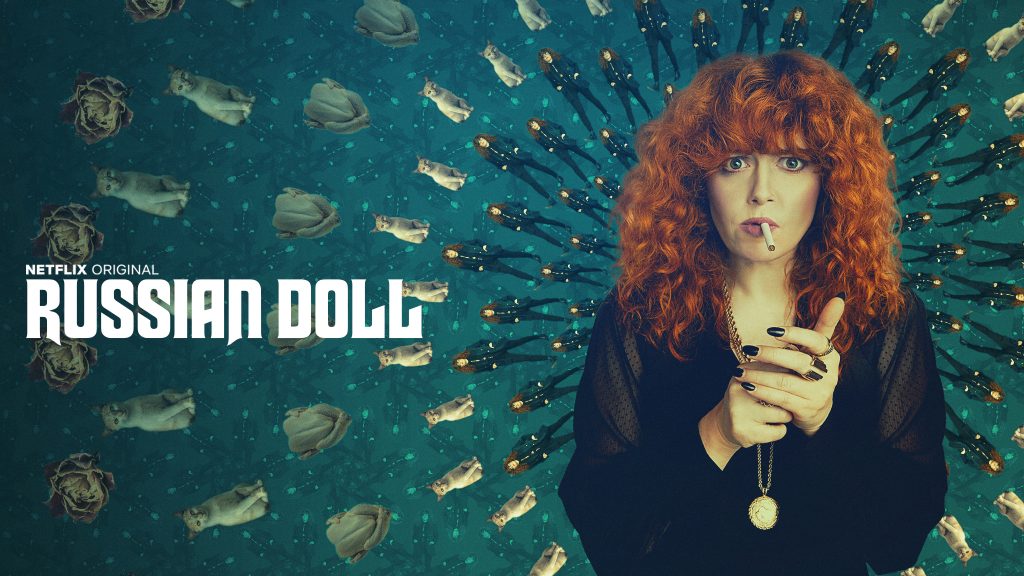 We called it “perfect.” And indeed, Russian Doll functions as a neat little capsule of a show with eight short episodes filled with cool-girl aesthetics, rabbit holes, and memorable one-liners. One might think Russian Doll’s premise — a woman stuck repeating her 36th birthday and death shortly thereafter — could get tiring. Instead, the show allows so many ways to interpret Nadia’s plight (is she in a video game? A religious quandary? A cycle of trauma?) that we found ourselves constantly pondering new theories and eagerly waiting to hear, “Sweet birthday baby” just one more time. It helps that Natasha Lyonne appears to be playing a fantastical version of herself and is surrounded by people that actually look like New York — such as Charlie Barnett as Alan Zaveri and Greta Lee as Maxine A second season is forthcoming and we can’t wait to see how they expand on the perfectly closed and complex narrative of season one. 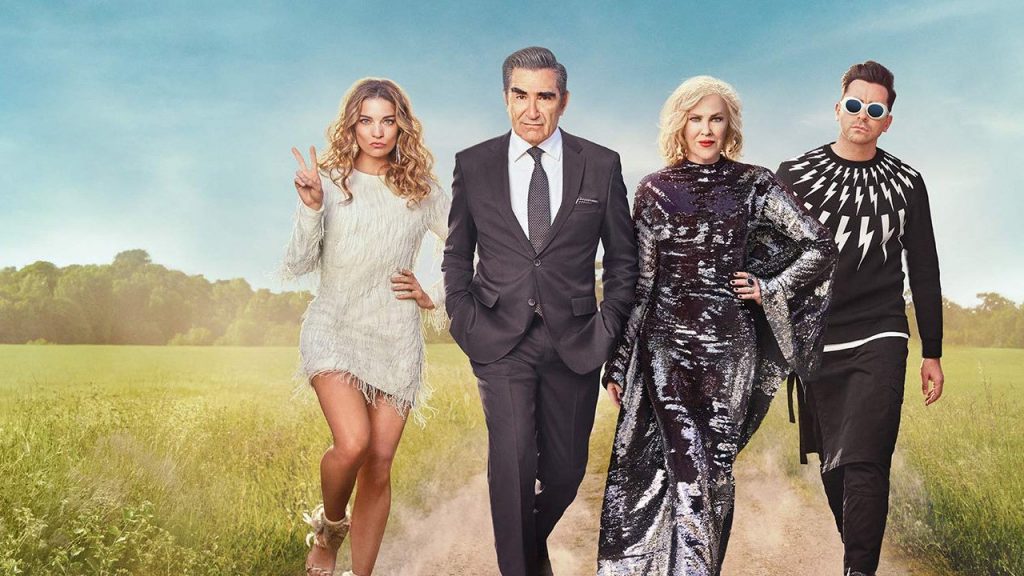 Schitt’s Creek has been getting a lot of attention since it migrated from Canada to the US via Netflix. We started off skeptical — rich-people-problems shows are not exactly our favorite. But after the first few episodes, Schitt’s Creek proves itself to be something greater and by this year’s third season, we’re seeing the Rose family in their most interesting iteration yet. They both have and haven’t changed — they’re still wearing their ridiculous avant-guard black-and-white outfits while still reconciling their worldly self-concepts to their new roles as citizens of Schitt’s Creek. But they’re also growing with David finding love and purpose in his store, Moira learning how to shine productively in the local theater scene, Johnny using his work ethic and experience in something worthwhile (the hotel), and Alexis learning how to value more than just status and appearance as evidenced by her getting an education and turning down that PR job. With the Roses, Schitt’s Creek has created fully fleshed out people who grow and change without betraying their problematic core. It’s a wonder to watch. 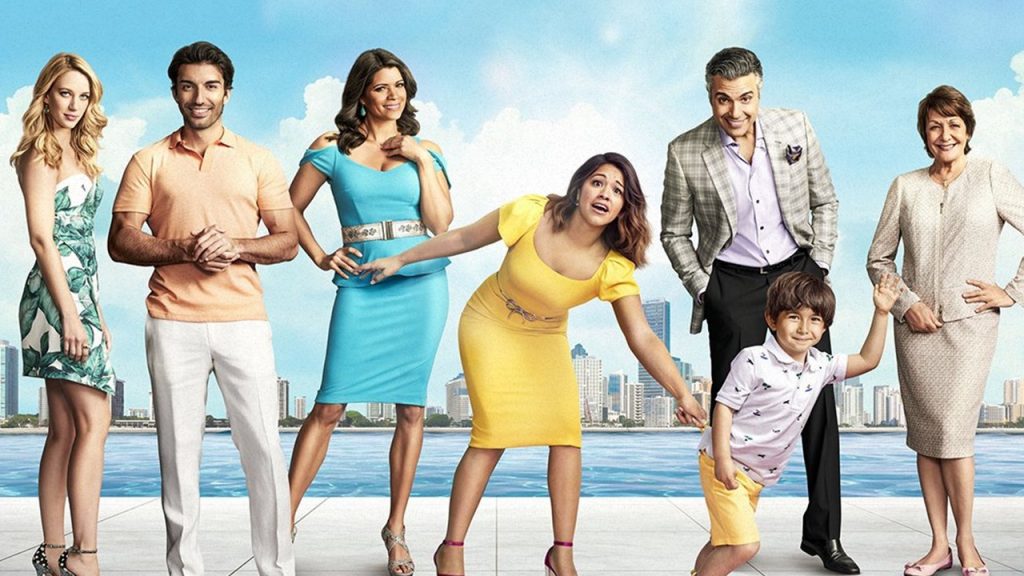 We love Jane the Virgin. Yes, it ticked all of our boxes by centering Latinas as we see ourselves, family-oriented with big dreams, trying to find love and happiness while navigating the intricacies of class, religion, race, etc.. We’re talking the human condition here and Jane had lots of that, resisting stereotypes even as it revealed in its telenovela cheesiness. We particularly loved Jaime Camil’s Rogelio De La Vega who managed to be hilarious, desirable, silly, and vain all at the same time. Jane ended this year with a heartbreaking opening arc (really, Michael coming back from the dead couldn’t be more devastating) and concluded by taking care of the Villanuevas with commercial and personal success all around (how can I get a book deal like that?). We’ll be rewatching this one for years to come. 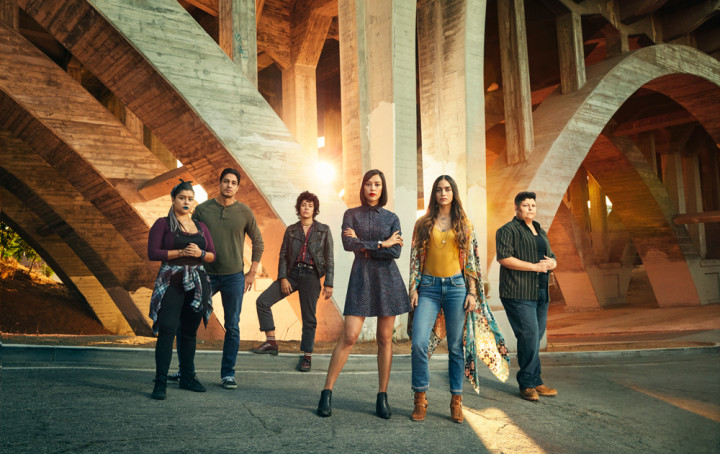 Vida was the best show of the year. Sexy. Thought-provoking. And most importantly for us, Latinx. In season two, the Hernandez sisters (Mishel Prada as Emma and Melissa Barrera as Lyn) are back in Boyle Heights for good, determined to make the bar and building profitable as they figure out what it means to make a new life in the old neighborhood. This year continues the trajectory of the first, exploring gentrification, racial identity, and sexuality with complexity and nuance. Season two is our favorite so far, with visually stunning set pieces like the after-hours party and sex scene between Emma and Roberta Colindrez’s Nico. It also benefits from being able to complicate many of its characters, particularly Chelsea Rendon’s Marisol who struggles with her sexuality, beliefs, and ambitions that pits her both with and against the sisters. Luckily, Vida’s already been renewed who knows it may just top our 2020 list too.

Lupin is the Nuanced Immigrant Representation We Need

Marvel’s Lastest Projects Remind Us of the Importance...