Witches are having a moment. And not just because it’s Halloween. The witch trope is everywhere as female power is being reimagined, reclaimed, and re-vilified in the media, religion, and of course politics. We have a  President who has reporters running around investigating which is really the “greatest witch hunt in history.” Then, there was the mass hexing of Brett Kavanaugh, which is hopefully taking further effect on Tuesday. Brujas even appear in our very own tagline here at Mujeres Problemáticas.

So it’s no wonder the media has delivered us not one, but two teenage witch reboots this October. Netflix’s Chilling Adventures of Sabrina premiered on October 26 and follows Kiernan Shipka of Mad Men fame as Sabrina, the new and improved teenage witch. You remember the original with Melissa Joan Hart, Caroline Rhea, and Beth Broderick as three blonde witches living with their black, talking cat. Meanwhile, the CW premiered their Charmed reboot on October 14 writing all three of the witch sisters as Latinx (although not managing to cast three, actual Latinas). The original brunette trio was Shannen Doherty, Alyssa Milano, and Holly Marie Combs in what they argue was a feminist show in its day.

Today, the The Chilling Adventures of Sabrina and the Charmed reboot position themselves as feminist TV, centering women, our power, and its consequences – aka they both have things to say. Yet, strangely, one of these shows is getting a lot more attention than the other. Any guesses as to which? Yes, you are correct, the blonds are getting 725 TIMES MORE ARTICLES. I did the math. Try it yourself. Do a Google News search for both shows and get some variation on what I got: a staggering 10.8 million pieces written about Sabrina and a much smaller 14,900 on Charmed. What gives?

Perhaps it’s that Netflix is a much more prestigious channel than CW. Netflix has won two Oscars, ten Emmys and five Golden Globes for shows such as House of Cards, Orange is the New Black, Master of None, and The Crown. Meanwhile, CW gets passed over so much, it’s become a running joke with critical darlings like Jane the Virgin and Crazy Ex-Girlfriend continuing to get snubbed by most awards shows. But why? Maybe it’s not the quality of the shows but rather the gatekeepers who dole out awards don’t take seriously programming who’s intended audiences are young people, young women, and the oh-so-misunderstood young women of color? As mainstream an outlet as TV Guide said that if Jane the Virgin “aired on ABC, maybe it would’ve already gotten an Emmy nod.”

So if the Television Academy doesn’t take young women seriously, who does? Normally, I’d say feminists. Feminists are always arguing that society needs to pay more attention to what young women are saying, doing, and thinking. Yet, I’m pretty disappointed here too. Jezebel ran a thoughtful critique of The Chilling Adventures of Sabrina. Bitch dived into the show’s feminist arguments. Neither publication managed a thousand words on the feminist ideas in Charmed, despite both publications being aware of the show (Jezebel covered the build up the CW premiere and Bitch listed the show as one of 14 to watch this fall). I imagine they had to pick. They couldn’t write TWO stories on teenage witch reboots and they picked one.

They picked Sabrina. And so did everyone else. Maybe it’s because of Kiernan Shipka’s larger presence, compared to the three relatively unknowns in Charmed. Looking at the numbers, Kiernan has 838K followers on Instagram and 67.2K on Twitter. The Charmed stars have about 650K on Instagram and 82.7 on Twitter COMBINED, making their social media presence less than Kiernan’s. On the qualitative side, Mad Men was a groundbreaking and critical darling while the Charmed stars are coming from shows you’re less likely to have heard of or in parts you’re less likely to remembers. Of course, parts for women of color are much harder to come by – overall, women get just 40% of the speaking roles on television and only 33% were women of color or just 13% overall. None of the Charmed stars would have been even considered to play John Hamm’s daughter. 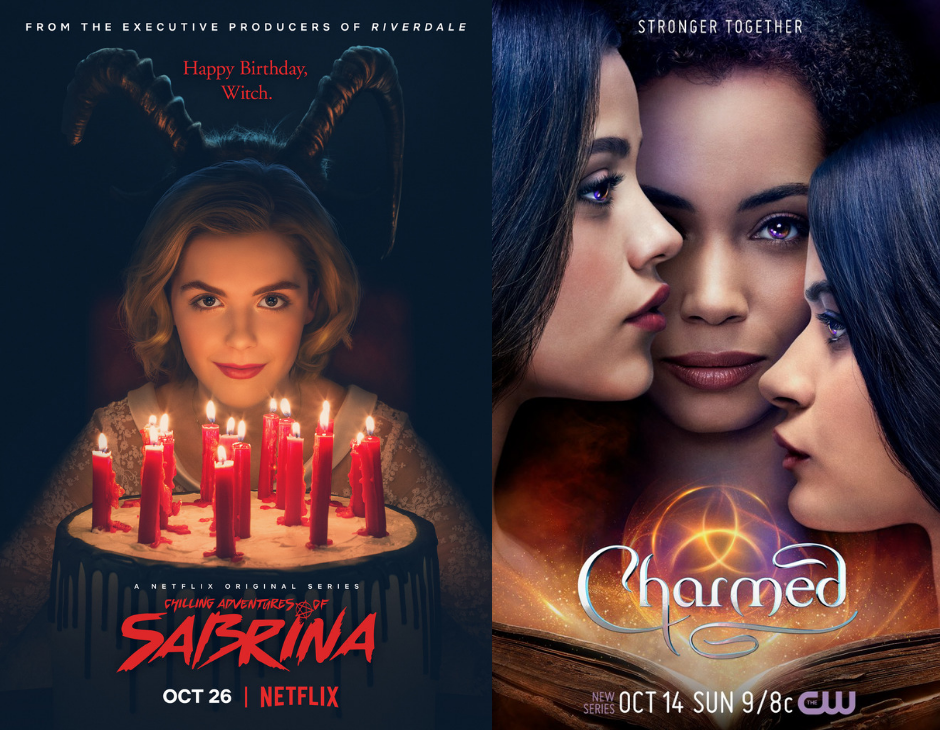 But I don’t think so. I don’t think it’s that Netflix’s PR machine is 725-time better than the team at the CW. I don’t think it’s that Sabrina came out all at once, allowing TV writers to binge watch the whole thing, while those wanting to write on Charmed have to wait for weekly installments. Those things may play a role. But the underlying reason can be found at the intersection of racism and sexism, clearly the extra penalty women of color pay for existing in this society.

Rarely do you get such a clear example. Here we have two eerily similar shows. They’re released weeks apart. They’re both reboots of early 00’s hits. They’re both about TEENAGE WITCHES. It’s pretty darn specific. Yet one show centers a white girl and her experiences while the other features Latinas. And that show gets taken more seriously. It takes up more space. It is deemed more “feminist.” There’s no getting around it. Race is the key difference. And that’s fucked up. As we say at Mujeres Problemáticas, it’s hard out here for a bruja.