Hi Fall TV: I’m Latino and NOT a Criminal

I’m writing to let you know that I’m Latino and not a criminal. Also I exist. Hi!

So before you can say “Latino Magnum PI,” I want to let you know that I’m also not part of the criminal justice system. I’m not a perp, victim, cop, DA, or personal investigator. Crime’s not really a big part of my life. One time my wallet was stolen. It sucked. BUT it was hardly a defining experience. Also, I’m not part of the drug trade. I’m not a mule, addict, dealer, mob boss, or corrupt politician profiting off the people’s suffering. True, I have been known to smoke weed from time to time but that hardly makes me a candidate for the Latino reboot of Friday.

That’s why I get so frustrated when so many of the Latino roles I see on TV have to do with drugs, crime, or the oh-so-stereotypical drug-crime combination. Don’t get me wrong, I love seeing Karla Souza as Laurel Castillo, one of the law-student co-conspirators on How To Get Away With Murder. I’m thrilled that la raza gets an unheard of TWO parts on Brooklyn 99. But I’m frustrated that when it comes to “prestige” drama, we only get leading roles if it’s Mayan MC or Narcos.

The fact is Latinos make up 12.5% of the American population. Yet, we’re only 5.8% of folks on TV. It’s even worse if you’re a woman (hi ladies!) because then we’re dealing with not just racism but sexism too. For Latinas like me, the numbers stack as 6% of the population in real life, but just 2% on TV. That makes Latinas the least represented ethnic group when compared to our numbers in the population. It’s not good.

It’s particularly not good when you realize how many of those small numbers of roles are wasted on the Latinos-as-criminals trope. You see a good 50% of Latino immigrants on TV are portrayed as having committed a crime and a quarter of all Latino storylines are crime-related. This despite the fact that Latinos and Latino immigrants ARE NOT more likely to commit crimes. Don’t believe everything you see on TV people (or that you hear the President of the United States say). 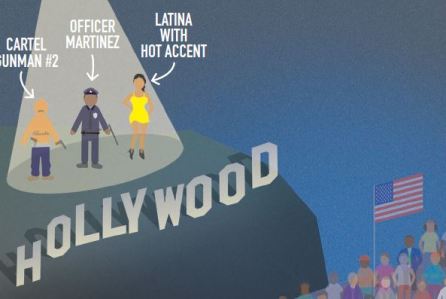 You can see why I’m so frustrated. It’s like TV, politics, and the powers that be are all trying to sell me the message that my family and I either A. don’t exist or B. are gangbangers. Neither of which is true (see the beginning of letter).

Now Fall TV, I do want to give you some credit. It’s not all bad (even if statistically it’s horribly). I am a witch, so good job on the Latino reboot of Charmed. At least you got that one right.

But seriously folks, can we get more Jane the Virgin’s? What is this universe where a show about being accidentally artificially inseminated rings the most true to the Latinx experience? And, of course, Jane isn’t even on this fall – we have to wait until 2019 to see the final season. In the meantime, I’ll be comforting myself with America Ferrera in Superstore, Gabrielle Ruiz on Crazy Ex-Girlfriend, and the original GOAT EGOT Rita Moreno on One Day at a Time. Because those are the women representing Latinas as regular, interesting humans on TV. It would be great to see more of us. Thanks!

Sincerely,
Cristina (no relation to Pablo – I’m not even Colombian. My family’s from Durango (Mexico, not Colorado)) Escobar